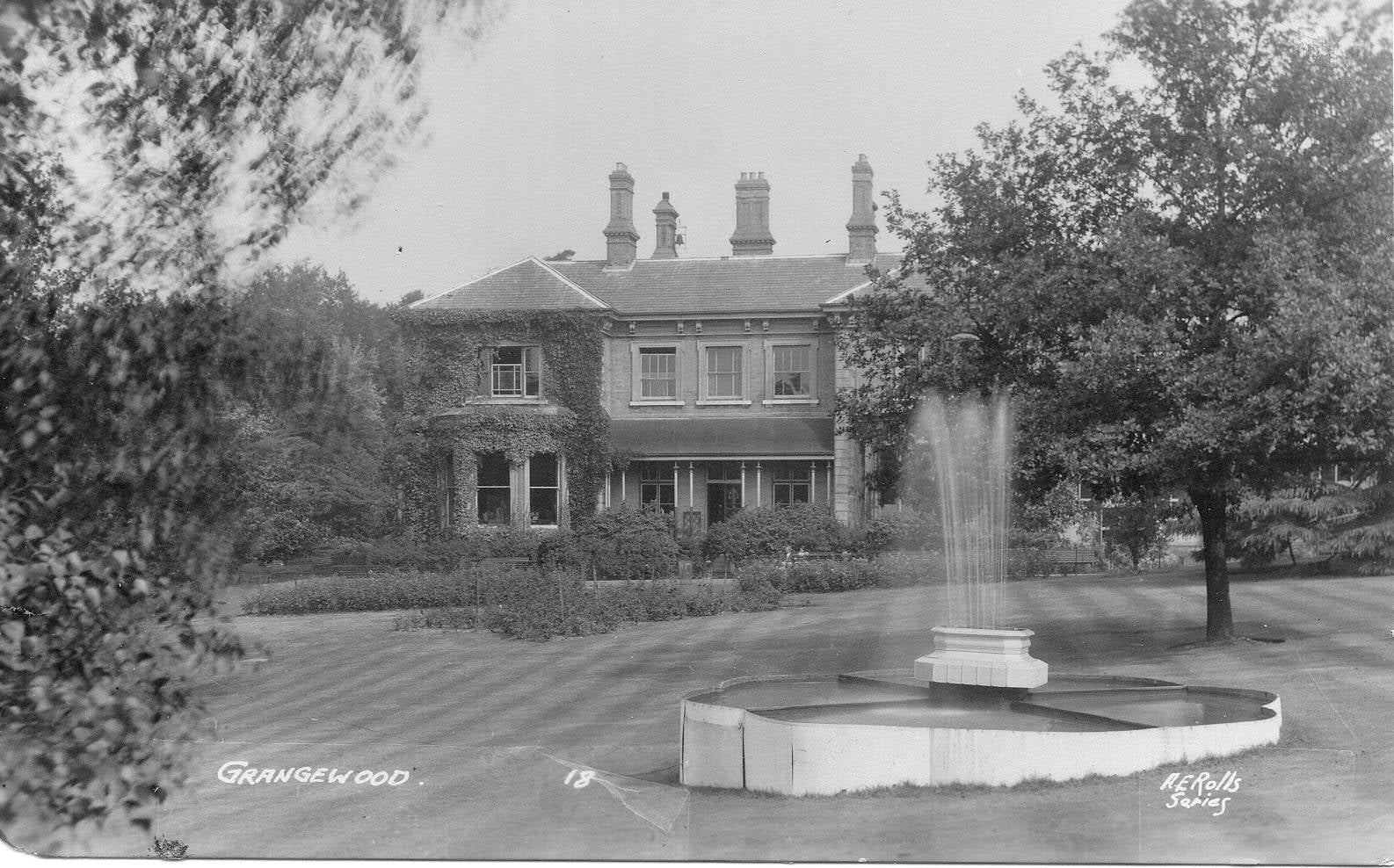 “Grangewood is one of our prettiest open spaces, diversified as it is by undulating scenery and many a woodland path, such as we might go many miles to see.”

Grangewood was originally part of the Manor of Whitehorse which was bought in 1787 by John Cator. The wood known as Whitehorse Wood was part of the Great North Wood. It was 80 acres in extent and belonged to two successive Bishops of London between 1299 and 1338. The name White Horse was not used until 1368 when the manor became the possession of Walter Whitehorse, Shield‐bearer to Edward III and before that it was known as Benchesham Manor.

READ ABOUT THE GREAT NORTH WOOD

In 1800 the wood was completely surrounded by fields and the nearest dwellings were cottages clustered around the farm house. By 1847 a track had been constructed across the wood to connect Beulah Spa. He divided the Whitehorse Estate into small plots and sold them for development. The east and west sides of Whitehorse Wood were cleared before 1850 and the remaining 30 acres to the east of Grange Road were developed as a private estate.

He commissioned Decimus Burton to build the Grangwood Mansion and layout out the grounds along with Beulah Spa. Burton (30 September 1800 – 14 December 1881) was a prolific English architect and garden designer.

A protegé of John Nash, he is  associated with projects in the classical style in London parks, including buildings at the Royal Botanic Gardens, Kew and London Zoo.

The first edition of the 6″ Ordnance Survey Map gives the layout of the private estate. The Mansion, stood in the middle of the estate with stables between it and the main entrance which was at the junction of Wharncliffe Road and Grange Road. To the East of the house there was a nursery and Ross Lodge, there was a second lodge at the entrance (today known as Wharncliffe Lodge ). Heath Lodge which stands at the southern end of the park is not shown on the 1870 map, it was built at a later date possibly when a second entrance was made from the junction of Grange Road and Ross Road.

The Mansion looked out onto quite extensive gardens which ran south from the house to the southern point of the property, and near Grange Road there was a small pond crossed by a rustic bridge. The northern end remained natural woodland with trees down both sides of garden.

Edward A Martin, scientist and author and curator of the Grangewood Museum, writes about the grounds of the park in a book about the museum available to read at Croydon Museum

In it he oddly he makes no mention of the historic Oaks which now dominate the park and instead talks of  the 29 acres of woodland inhabited by a Tulip tree on  high ground near the Mansion, Conifers, Scottish Pines, Larches, Sycamore, Elder, Horse Chestnut and Cypress.

Martin also describes Silver Birches scattered thought the woods and a Magnolia as well as Cherry and Laurels aplenty, with Yew, Holly, Willow and Poplars.

In the lake to the south western border there are goldfish imported from Japan and “not to forget to mention the Squirrels which a year or two ago invaded the woods and have since nested in the park.”

Gorse and Furze flourish in the  park  as do wood Anemones, Butchers Broom, Dog’s Mercury, wild Hyacinths, Bluebells  and Monocotyledon in whites and pink.

The house was sold to Daniel Fletcher and then Charles Hood. In 1890 when the Metropolitan Asylum Board proposed to purchase  the house causing controversy with residents the Croydon Corporation purchased the grounds in 1899. 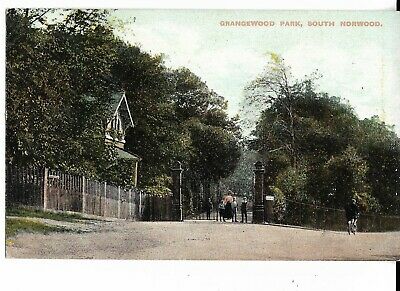 Lady Edridge  wife of the then Mayor of Croydon and the first “Lady Freeman” of the Borough gave a bandstand to the park in In 1901. To complement the ornamental gardens and woodland walks that already existed, the Council built a bowling green and tennis courts. Band concerts entertained the public during the summer months but the popularity of the performances declined and the stand was eventually demolished after the war.

The mansion was a two storey building of Victorian style with bay windows, veranda and a conservatory on the south east corner. Following the purchase of the park by the Corporation the mansion was used as a Museum which housed a fine collection of minerals, corals, shells and local Roman antiquities.

One room in the Mansion was known as the Veterans Club for the use of the male pensioners of the district where they played cards and other various games or sat and talked. Visitors to the park and museum could obtain refreshments from the tea‐room in the house.

The house was partly used as a school for those with mental incapacities during 1918 to 1923. In World War I, Canadian troops had been billeted there.

The museum closed during World War II and the mansion was partly used by an Air Raid Precautions unit from 1939.

Grange Road was bombed and the Mansion  damaged during the strike which led to the dispersal of the  museum goods.

The mansion which consisted of  two main floors with a basement and  23 rooms was never repaired after the war and became derelict. This led to its ultimate demolition in 1957 and in its place an attractive garden was laid out on its site.

The Mansion fell into disrepair and in 1960 was pulled down. The foundations were retained and laid out as a formal garden with the bay windows as flower beds.

Ross Lodge was demolished in 1987 due to serious movement of the foundations caused by the underlying London Clay and the site  was redeveloped as the cultural garden. 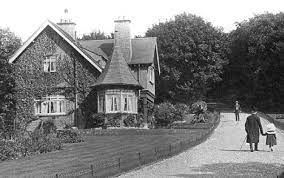 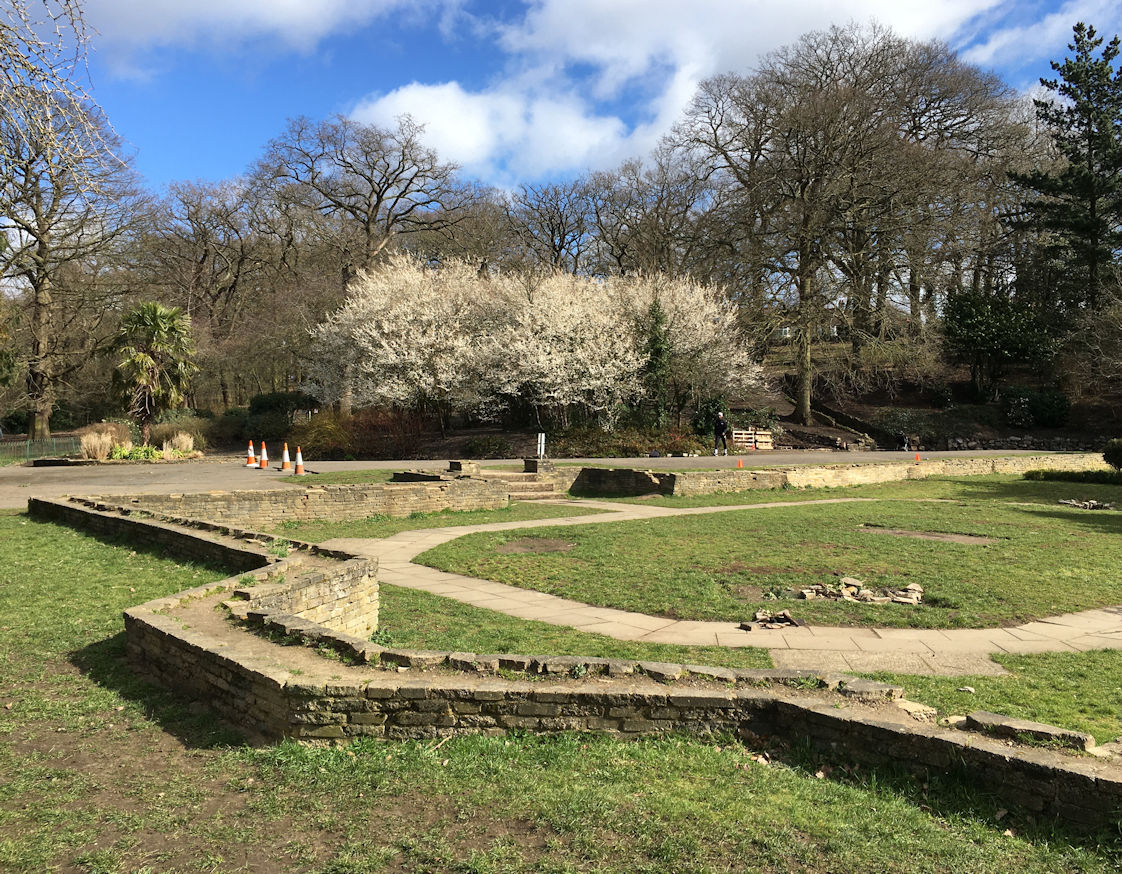 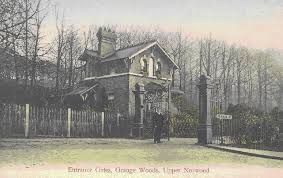 In September 2021, The Friends of Grangewood Park held celebrations in the park to mark its 120th anniversary.

In October 2021, despite thousands of objections the council’s cabinet voted to sell off the last remaining lodge in the park – Heath Lodge – which had in the past been the park keeper’s cottage before it was allowed to fall in to disrepair. It will soon be auctioned to raise money to help pay the council’s debts after it went bankrupt in November 2020.

We use cookies on our website to give you the most relevant experience by remembering your preferences and repeat visits. By clicking “Accept All”, you consent to the use of ALL the cookies. However, you may visit "Cookie Settings" to provide a controlled consent.
Cookie SettingsAccept All
Manage consent

This website uses cookies to improve your experience while you navigate through the website. Out of these, the cookies that are categorized as necessary are stored on your browser as they are essential for the working of basic functionalities of the website. We also use third-party cookies that help us analyze and understand how you use this website. These cookies will be stored in your browser only with your consent. You also have the option to opt-out of these cookies. But opting out of some of these cookies may affect your browsing experience.
Necessary Always Enabled
Necessary cookies are absolutely essential for the website to function properly. These cookies ensure basic functionalities and security features of the website, anonymously.
Functional
Functional cookies help to perform certain functionalities like sharing the content of the website on social media platforms, collect feedbacks, and other third-party features.
Performance
Performance cookies are used to understand and analyze the key performance indexes of the website which helps in delivering a better user experience for the visitors.
Analytics
Analytical cookies are used to understand how visitors interact with the website. These cookies help provide information on metrics the number of visitors, bounce rate, traffic source, etc.
Advertisement
Advertisement cookies are used to provide visitors with relevant ads and marketing campaigns. These cookies track visitors across websites and collect information to provide customized ads.
Others
Other uncategorized cookies are those that are being analyzed and have not been classified into a category as yet.
SAVE & ACCEPT